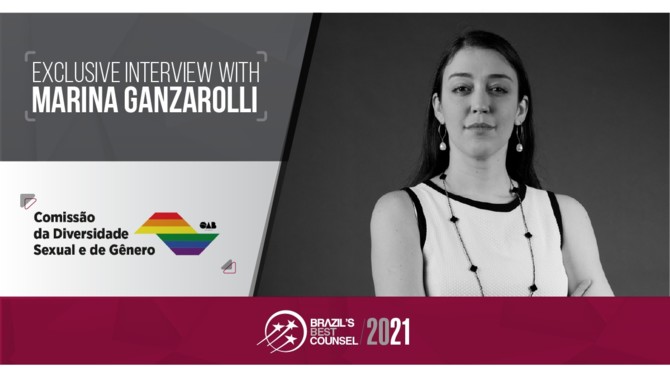 Marina Ganzarolli is founder of the MeTooBrasil movement and President of the Commission for Sexual and Gender Diversity at the Brazilian Bar Association’s São Paulo Branch (OAB/SP), an organization which promotes equality-driven initiatives and brings awareness to the rights of the LGBTQI+ community. In this feature interview, Ms. Ganzarolli discusses the commission’s key objectives, how LGBTQI+ individuals can directly benefit from existing initiatives and the road to increasing sexual and gender diversity in the Brazilian legal market.

Leaders League.How did the Commission for Sexual and Gender Diversity (OAB/SP) come about?

Marina Ganzarolli. The Commission for Sexual and Gender Diversity at the Brazilian Bar Association’s São Paulo Branch (OAB/SP) was born in 2010, under the presidency of lawyer Adriana Galvão, who had been inspired by initiatives from the Federal Bar Association and overseen by professor Maria Berenice Dias, which is the leading figure of homoaffective law in Brazil and the individual who coined the term ‘homoaffective’, a term consolidated in the Federal Supreme Court’s (STF) decision recognizing the right of LGBTQI+ individuals to stable unions. Ms. Dias performed very important work ahead of the National Commission for Sexual and Gender Diversity of the Federal Brazilian Bar Association, in Brasília, an initiative which was swiftly emulated by the São Paulo branch.

The Brazilian Bar Association (OAB) is divided by states and the São Paulo branch is the largest chapter in Brazil with over 400 thousand lawyers, more than 150 topical commissions on different areas of law as well as 200 councilors at the Sectional Council. As a Head Sectional Councilor, I am one of the youngest and also the only openly lesbian member of this collegiate body which judges the ethical and disciplinary issues of the advocacy sector. Topical Commissions address issues which affect the practice of the legal profession in all of its forms and the goal of the Commission for Sexual and Gender Diversity, I often say, is to defend the advocacy for diversity and also advocacy with diversity.

Could you tell us about the Commission’s main initiatives? What have been the practical impacts of these projects?

Commission mandates last three years, as do the mandates of the OAB councils. Our administration, under my presidency, began in January 2019 and, since then, amongst several initiatives, congresses, symposiums, debates, public hearings and the commission’s participation in parliamentary fronts for the defense of LGBTQI+ rights at the Legislative Assembly of the State of São Paulo as well as municipal legislatures, I would highlight three which have been the most relevant and important for our community.

First of all, I would highlight the public hearing and the whole “Julga Já STF” (“Judge Now, STF”) campaign, seeking the criminalization of LGBTphobia at the Federal Supreme Court in the beginning of 2019, during which we coordinated an intense campaign which was successful thanks to the Commission, its reach and its capillarity within the 247 subsections across the State of São Paulo, also campaigning via our social media. Soon afterwards, we were rewarded with a majority decision from the Supreme Court in favor of criminalizing LGBTphobia.

Another key initiative is “Poupa Trans” which we set up in association with Vote LGBT, the largest LGBT non-governmental organization in Brazil. This initiative ran for four months at SESC 24 de Maio community center, providing the LGBTQI+ community with free advice on domestic violence scenarios and legally altering given names and assigned genders at registrars. We helped hundreds of trans men and women to obtain the required certificates to legally change their names and genders before the Public Defender’s Office.

Lastly, I would highlight the “Constitution of Pride”, a campaign and publication we launched during diversity month, in June of this year, to increase awareness of the LGBTQI+ community’s rights. The Constitution can be freely downloaded at www.constituicaodoorgulho.com.br and is decorated with the colors of the rainbow flag, a flag which represents the diversity of our community. It is important to remember that, despite having fought for the last 20 years for our rights to be recognized by the judiciary and the Supreme Court, we already possessed these rights constitutionally, rights which the STF has now guaranteed us access to.

How can LGBTQI+ individuals participate and benefit from these initiatives?

With regards to “Poupa Trans”, we have advised on over 200 gender and first name changes on birth certificates. Evidently, several of these changes are still ongoing as they involve sending documents to out-of-state registrars, but we directly cater to over 200 trans women at “Poupa Trans”.

LGBTQI+ individuals can benefit from these initiatives by accessing our “Constitution of Pride” and familiarizing themselves with their rights so that we may fight together for them.

Lastly, it is worth remembering that non-legal LGBTQI+ professionals may also participate in the Commission. The Commission is geographically restricted to the State of São Paulo but is open to all professionals, students, interested parties and family members. We have a “Mothers for Diversity” board which is part of our Commission. So all are invited to embark with us on this journey to fight for the rights of the LGBTQI+ community.

Which measures are necessary to increase the participation of LGBTQI+ individuals in the legal market?

Diversity and inclusion in the labor market is always accompanied by a process of awareness raising, education and organizational reevaluations within institutions. Exclusively focusing on visibility is not enough. Brands and companies are increasingly running commercial campaigns targeting specific target audiences within the LGBTQI+ community, by using colorful packaging and supporting diversity events. However, we are not only talking about visibility but also about representativeness and these are very different things. To guarantee visibility, we need to ensure LGBTQI+ individuals have access to places of power and privilege so that they may be decision-makers and make a difference.

One very important issue when reflecting upon representativeness is thinking of access, permanence and ascension. How many LGBTQI+ individuals are there in companies and what is the recruitment process for the entry of these people at companies? Beyond access, however, once an LGBTQI+ individual is within an organization, what is their experience within that environment? Can they use the bathroom according to their gender identity without issues? Are they respected by colleagues whilst using their social name? Or are they excluded from social events and the sharing of information which takes place outside of a professional setting?

With regards to ascension, the glass ceiling which exists for women, frequently also specifically exists for the trans population. An individual might reach a certain point in their career and after that have no more room for growth within that company. They are not offered the opportunity to become partners or to receive other benefits, as is given to other individuals – this is due to sexual discrimination against their gender identity. So we must reflect on how inclusion and diversity must be implemented on these three levels. It is of no use to merely invite the LGBTQI+ community to the party, if they are not invited to dance and enjoy the celebration.

Which new initiatives can we expect from the Commission over the next 12 months?

Over the next 12 months, we will gradually approach the end of our three-year mandate of which one and a half years have passed. Due to the Covid-19 pandemic, our strategic planning has significantly changed but, in the coming months, we will conclude the projects we began and begin to present the results of our administration.

In June 2021, in a very colorful and diverse event, we will organize the Diversity Marathon. There will be daily events throughout the month of June, including the organization of an International Congress of Diversity Rights, with the presence of international jurists specializing in Diversity Law in their respective countries.

If the São Paulo LGBTQI+ Parade goes ahead, we will be physically present with Brazilian Bar Association and Commission stands at the diversity fair, showcasing all the law firms interested in sharing their diversity and inclusion initiatives. Our project “Poupa Trans” will also be present along with other surprises which you can expect in June 2021.